There are lots of movie fans who just love to root for the guns in a movie from western to science fiction or gangster flicks. Here in no particular order are four of the most famous guns in movie history:

There are lots of movie fans who just love to root for the guns in a movie from western to science fiction or gangster flicks. Here in no particular order are four of the most famous guns in movie history:

Grenade Launcher from Scarface
The M16 complete with M203 grenade launcher from the Scarface movie has to be one of the most iconic weapons and famous movie guns. It belonged to the Al Pacino character, which was played by Tony Montana.

The weapon itself isn’t really that accurate in true life, but Montana makes the audiences love it by the way he handles it. He is able to fight off a bunch of guys trying to kill him while brandishing it and shooting lots of bullets and grenades. This is a truly powerful weapon and it can kill a lot of people all at once when used correctly. That’s part of what makes it exciting and a part of this list. 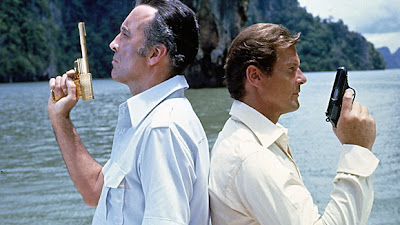 Golden Gun from James Bond’s the Man with the Golden Gun
The Man With The Golden Gun, one of the James Bond movies starring Roger Moore as Bond and the bad guy, Francisco Scaramanga, is played by Christopher Lee. Scaramanga’s little golden gun is iconic due to its special 23 carat golden bullet. The bullet has the name of the person he wants to kill on it. Plus, the gun can be turned into other objects like pens or even cufflinks!

.44 Magnum from Dirty Harry
A .44 magnum pistol is a well-known gun that the Dirty Harry character uses quite well both to shoot people and to scare them even if he is out of bullets.

In the movie they call it the most powerful handgun in the world. Plus, Harry uttered the famous “Are you feeling lucky?” quote that is mimicked all the time in connection to the .44 magnum.

This movie has made this gun, which is made by Smith and Wesson, stay popular for a long time. During the run of the Dirty Harry movie the company noted that they sold even more of them than usual. Rail Gun from Eraser
According to the U.S. Navy, a rail gun can shoot so fast that it is seven times the speed of sound. Arnold Schwarzenegger made it even more famous in the Eraser movie, where he had two of them. Plus, it leaves a cool plasma trail to admire. Plus, this weapon has a night vision capacity and can even see through walls with its x-ray capabilities. 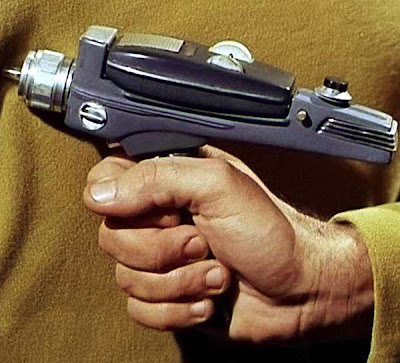 Star Trek’s Phaser
Star Trek had several movies and all of them featured the iconic space gun – the Phaser, which is an advanced laser beam weapon. It can be set to stun if you don’t want to kill someone, or to various levels of intensity for heating up rocks to keep you warm or killing off the bad guys. It underwent several changes throughout the series from a clunky big one to a small handheld one. Science fiction fans will always love the phaser.

For the Record…We own guns.